As the race to White House heats up, the 2020 Democratic Presidential Candidates begins to narrow as the field of 20 toward one choice to face off against President Donald Trump in November of 2020.

With the primary and caucus season closing in, the following men and women are emerging as front runners to secure the Democratic nomination.

Want to learn more about the 2020 Democratic Presidential Candidates and their platforms? Participate in polls? Find out how the political system really works? Download UDecide which is a non-biased app that puts a wealth of political information in the palm of your hand. 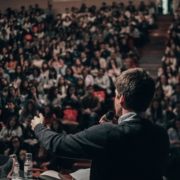 Key Takeaways from the November 2019 Election